Sake is a traditional Japanese alcoholic beverage made from rice, and is brewed using a variety of techniques developed through the efforts of our ancestors. The main principle behind the production of alcohol from rice is that steamed rice is broken down by the enzymes of koji mold, and the resulting glucose is fermented into alcohol by yeast. 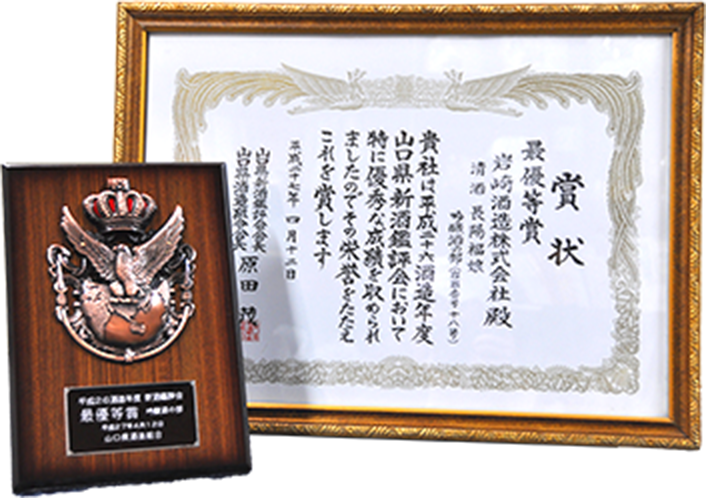 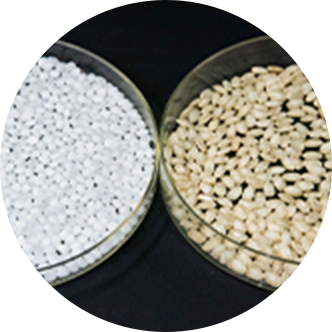 “In search of high quality sake-rice, such as Yamadanishiki”
The sake rice used to make Choyo Fukumusume is Yamadanishiki, Saito no Shizuku and other sake brewing-friendly rice. Sake rice is purchased through the Yamaguchi Sake Brewers Cooperative Association from contract growers under the Zen-Noh Yamaguchi Prefecture Headquarters.
Yamada Nishiki in particular is purchased from producers participating in the Hagi Sake Rice Migaki Cooperative, and all rice is produced locally in Hagi-Abu. The rice is milled at the Hagi Sake Rice Migaki Cooperative’s rice milling facility. The main rice milling ratio is 35% for daiginjo, 50% for junmai-ginjo, and about 60% for Junmai-shu. The closer to the surface the rice is the more minerals, fats, and proteins it contains. Also, the closer to the center the rice is, the more pure the starch is. 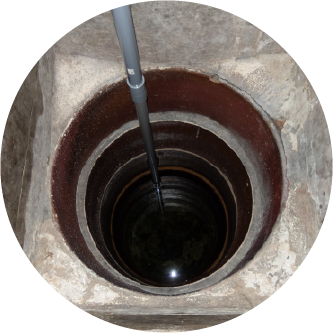 "polishing water to get to clearer!"
Choyo Fukumusume sake is made by using subterranean water from the Abu River that gushes from a well on the brewery grounds. The quality of the water is not comparable to the best water in Japan, but it is medium-soft water with the right amount of minerals suitable for brewing. This water is soft and mellow to drink and greatly contributes to the gentle taste of Choyo Fukumusume. To obtain even clearer brewing water, the water is filtered using activated charcoal to remove iron and organic matter, which is considered to be harmful to brewing, and this is achieved by sterilization using ultraviolet rays. In addition to using groundwater that has remained unchanged since the ancient times, we make every effort to “polish” the water by removing any impurities in order to brew delicious sake that will please our customers.

Washing and soaking the rice 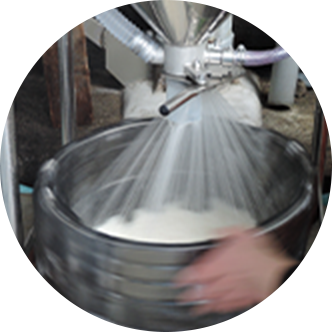 "The starting point of sake brewing and the aim is second by second controls throughout the whole process."
After the rice is polished, the white rice is washed using a special rice washing device called the MJP Rice Washer. At the same time, the rice is soaked in water to allow it to absorb the necessary moisture for steaming. This washing and soaking process is a crucial step in obtaining high quality steamed rice essential to the brewing of the best sake, so time is carefully monitored down to the second. Rice washing is done in units of 10 kilograms during which the water used is adjusted and kept at a constant temperature of 10 degrees Celsius in order to minimize the effects of different types of rice, different lots and taking into consideration the temperature and humidity of the day. 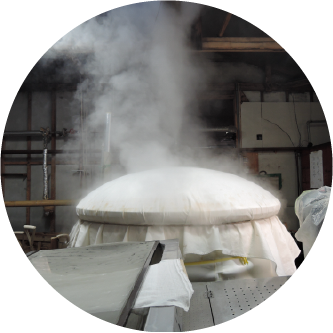 "The aim of this process is to produce high quality steamed rice that is hard on the outside and soft on the inside."
After the rice is washed and soaked, the raw rice is steamed the next morning. The steaming process sterilizes and disinfects the raw rice and alpha-types the starch in the rice this makes it easier to make koji in the subsequent process, as well as making it easier for the enzymes in the koji to work in the fermented sake. The steaming process of Choyo Fukumusume is done in a traditional Japanese kettle and a metal steamer with a special double-layered structure, while a small wooden steamer is used when the amount of steamed rice is small. A boiler fueled by heavy oil is used as the heat source, and the steam, from the boiler is blown into the well water in the kettle to create clear steam. 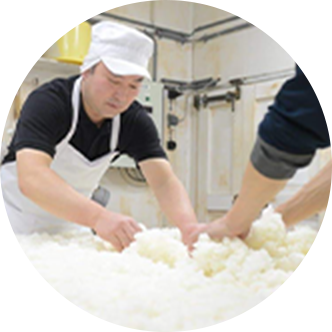 "Malted Rice, yeast and craftsmanship are the culmination of techniques that determine the taste of sake."
Malted rice is made by growing a mold called koji on the surface of rice, which produces and supplies enzymes to dissolve the raw material, sake. The steamed white rice is cooled down to a moderate temperature and taken to a koji-making room called a koji-muro, where the temperature and moisture are controlled, and the sprinkled with spores of a type of mold called yellow koji, which has been used to make sake since ancient times. After the steamed rice is put together and left to rest overnight, it is broken up in a process called kirigai (cutting back) and moved to a separate room, where it is placed in special wooden boxes and gradually raised in temperature for about a day. During this time, the koji is cleaned and mixed together twice to equalize the product temperature and adjust the thickness to create the ideal koji. 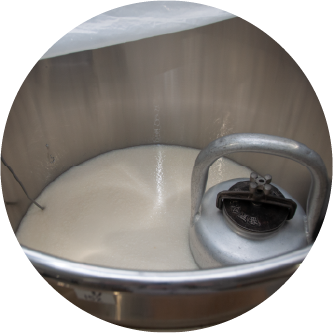 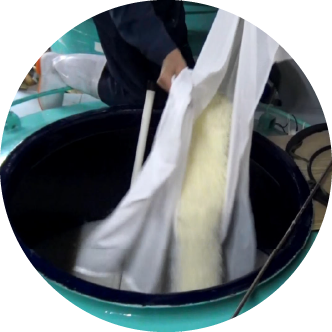 "This is the traditional three-stage brewing, parallel double fermentation unique to Japanese sake."
Sake is brewed by adding brewing water, koji, and steamed rice to a large amount of yeast-containing unrefined sake. This is called Honjikomi. This process is usually divided into three stages; Hatsuzoe, Nakazoe, and Tome-zoe. This is called 3-stage jikomi, and it is done by adding the ingredients to the unrefined sake little by little, which encourages the growth of yeast bacteria, and also makes it less susceptible to bacteria that may accidentally enter during the brewing process. After the brewing process is complete, it must undergoes fermentation period of about 20to 30 days before maturing to produce sake with an alcohol content of about 17%. 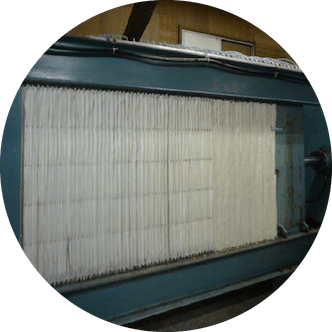 "The birth of new sake is almost at the moment of completion."
After several days of fermentation, the unrefined sake gradually settles down. After the balance of the flavor has been determined and the time has come to press the sake, a special press is used to separate the sake from the sake dregs through a process called josou. In the old days, sake bags were placed on top of each other in an enclosure called a fune, and pressure is applied from above to squeeze the sake. The new sake flows out of the tank and is sent to a tank for storage after checking the flavor and aroma. 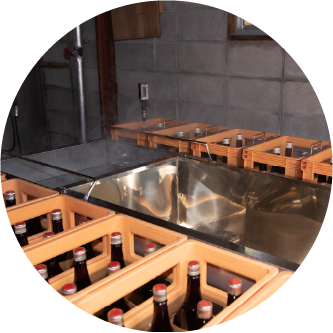 After the process is completed the sake is allowed to settle in a storage tank, and then the “ori” which is a component of the unrefined sake is filtered out as raw sake. The bottled sake is then soaked in warm water and heated to about 65 degrees Celsius to sterilize it and deactivate enzymes derived from the koji, thereby improving its shelf life. This process is called “hi-ire”, and Choyo Fukumusume uses a time-consuming method called “bottle heating” to carefully hi-ire each bottle.

After the sake has been heated, it is rapidly cooled under running water and then stored in a special refrigerated facility. High quality sake such as Junmai-shu and other sake with special names are stored under refrigeration to preserve their flavor and deliver them to the customer. 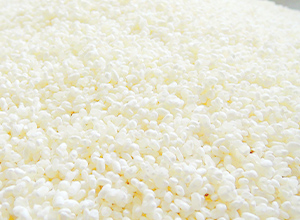 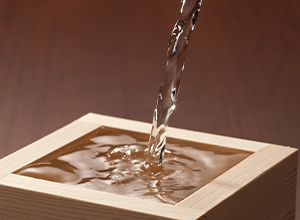 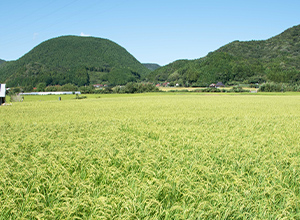 Drinking is not allowed before 20. Sake is delicious and appropriate.
Drinking under the age of 20 is prohibited by law.
Drinking during pregnancy and lactation may adversely affect the development of the foetation and baby.